I just spent the last month visiting my mom at her home outside of Montgomery Alabama. We had planned a long stay so that we could do some remodeling in the RV as well as spend some quality time together. What I hadn't planned on was our visit coinciding with the release of the man who caused the automobile accident that killed my father and permanently injured my mother.


March 20th would have been my dad's 66th birthday if it hadn't been for that fateful day October 15, 2009. It was a day that found a man too much in a hurry, too irresponsible to have a driver's license...a man who would illegally pass another vehicle only to collide head-on into my parents car. My dad died a week later, my mom still has physical pain every single day. I miss my dad. 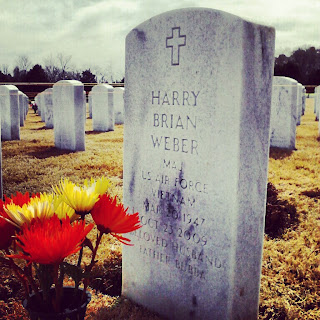 My mom and I made a trip to the Alabama National Cemetery in Montevallo to bring flowers to dad's grave on his birthday. The dreary grey skies soon turned blue as the sun broke through the clouds. As we walked to his marker my mom pointed out that he would have loved the view...his stone faces a pond. A bird skirted through the reeds and stopped to look at us for a long while. If I didn't know any better I'd say that maybe dad had sent that bird.


We got a vase and set the yellow and orange mums at the base of his head stone. It still seems so surreal...even after all of these year. 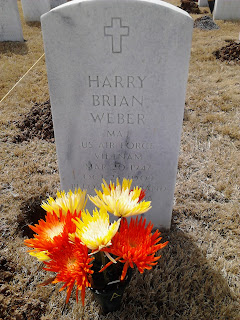 His birthday fell on a Wednesday. Two days later we were in court to see, perhaps for the last time, the man who caused this heartache. The man who killed my dad and argued in court that 2 years in jail was too harsh of a penalty for what he had done. I didn't know what to expect...would I cry or break down or scream at him? Would he look at me and know that it was MY dad he killed?? Would he know that while he was going to be released the very next morning and be able to hug his family and live his life I would be longing for just 5 more minutes with my dad?

When his name was called and he was brought out of the holding cell my mom and I approached the bench. He never made eye contact but he saw us. He was noticeably nervous. I stared at him trying to read his thoughts...willing him to just turn to us and apologize. Just 3 simple words..."I am sorry".

They never came. I felt numb. My mind wanted me to scream and an image of me losing control and being dragged off of this man flashed behind my eyes. And then a warm calmness seemed to embrace me. Here's what I wrote that day:

Today I got to stand next to the man who killed my father 3 years ago. He served a 2 year sentence and is being released from jail tomorrow. I felt nothing but pity for this man. I feel that he does not grasp the enormity of his responsibility for his actions and his words, some how it's always someone else's fault or circumstances beyond his control. He, like all of us, is a product of every decision he has made throughout his life. If he wants forgiveness and perhaps even a happy and fulfilling life he can start by understanding that every decision, every action, every thought, every word spoken creates the person we become and life that we live. Although he is not the victim (although he truly believes he is in one way or another) I pity him for the life he took (my dad's) as well as the one he is throwing out the window, his own.

Trust me...I wanted to hate him. I wanted him to die a slow and agonizing death or have someone dear to him be taken away. I wanted to belittle him, yell and make him feel like he would be better off dead. But what I really wanted was my dad to not be dead...and nothing anyone did could make that happen. So, the next best thing was to not allow this man to take any more life from me, to shift the focus off of him (because he doesn't deserve it anyway) and place it on the love I have in my life...the love I feel is even stronger now that this tragedy has taken place. 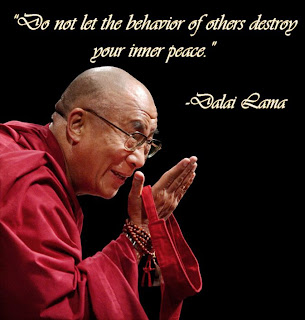 I can't explain this shift that occurred. Perhaps it was beyond my control. I'd like to think my dad somehow had something to do with it...I know I dream about him more often now. Certainly getting older has played a part in this new perspective but I think my yoga practice and meditation has also been a factor. I find myself less reactive and more introspective...less willing to allow others to destroy my inner peace and more willing to find empathy. Some might mistakenly believe this is a weakness, that I am being a push over, but its not and I'm not. It takes a certain kind of strength to be responsible for one's feelings and emotions and to forgive those we think we should hate...and in most worlds, have the 'right' to hate. 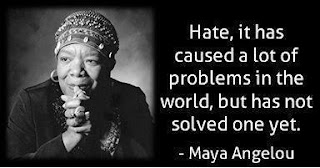 But fear not...I am far from perfect and I still get into silly "arguments"  with complete strangers on Facebook. I still have 'buttons' that can be pushed and I have yet to really learn how to take a compliment. All of life is a lesson and we are constantly learning. And yoga and meditation are called 'practices' for a reason...seldom, if ever, does anyone attain perfect enlightenment. But it's a journey we all take and we can choose how that road is paved. We can be victims or survivors, we can stay stuck in the mire or persevere until we reach firm ground, we can blame everyone else or take credit for who we are, we can feed the hate or feed the love...for that which we feed grows and what we starve dies.

We leave Alabama tomorrow and I'm really going to miss my mom. It's been great having all of this time with her. She's the sweetest, most loving person you could ever meet...and I'm not just saying that. I'm thankful that out of this pain our relationship has grown stronger and our love deeper. She's an amazing woman and I'm a very lucky daughter.